A collection of the best free online car games. The best ride right in your browser.

Free games allow you to play all types of racing and driving games with cars. Within this category you can:
- Drive dream car on a free ride in the open world
- Race on race track, circuit or rally
- Enjoy terrain adventure with a offroad car
- Overcome speed limits with super cars and in drag races
- Drift with real Japanese cars
- Get real experience from car-based jobs
- Learn to park
- Take part in a police chase
- Explore hundreds of 2D and 3D car games
All games are playable right in your browser, no installation needed.

Racing, parking and drifting games - it are basic representatives of car-based games. Anyway, there are more types of car games - driving games, taxi games, off-road games or car business games. This webpage aggregates the best car games to one place.

You can find and play here all vehicles referred as cars, especially:

Most car games have one thing in common - they all allow you drive the best, most fun and additive conceivable cars! Do you have a driving licence to drive them? Ohh, wait, this are games, who cares for driving licences... Although, if you are the case, you can get a driving licence through driving school games. Every ride starts with an engine start - with a key, by a button or remote. Then, engage a gear, press accelerator to the floor and reach the unimaginable speeds. It may be in a few seconds, but also in years, it depends on selected car.

Sport cars, supercars and various types of drag and tuner cars - it are usually real beasts on 4 wheels. Every acceleration and ride with these cars bring you unforgettable feel of speed. Ferrari, Lamborghini, Buggati or Porsche brand cars - these are synonyms of a sport ride. Anyway, even more common cars are able to make a feel of a ride of your life during every passed mile. Mercedes, BMW, Aston Martin or Maserati, everyone knows how fast they are... but, have you heard about Tesla and its incredible acceleration? Forget petrol cars, the power is in electricity. Are you interested in to drive any of these super attractive and super fast cars? Games on this page are the greatest opportunity to do it right now.

Challenge yourself to become a speed racer

Compete on track and race against other drivers. You will need skills to overcome difficult terrain and harsh weather conditions. If you do not handle this at first, try again and again, training is the best tool to improve ourselves. Beside better skills, sometimes there will need to also have better vehicle - you can get it in the shop. You can buy useful kits and equipment for car tuning and unlimited customization. More powerful engine, bigger turbo, faster gearbox, nitro and so on - it are necessities for racers. Any car you buy at the start will need these improvements sooner or later to be competitive in races. Anyway, one of the most important ones is chassis and especially quality tires. According to type of your ride, you will invest more time to tune and change this than into the ride. Initial stock parts on a car are very poor and should be replace for professional ones. It will provide an extreme boost in car performance and handling. Such properties push your car abilities to the next level.

Use keyboard to speed up, brake, and steer, and don't be shy to show off some spectacular stunts! Do flips and twist and perform various tricks that nobody has ever seen before. Do a little drive-by and hit enemy gang hard! Drive your fellas to the safety while they are shooting down annoying members of other gangs. You see? You can use cars to do bad things, but who cares when it's pure action and fun! So fasten your seatbelt and sit into a gigantic monster truck parked right next to you. Do you have what it takes to handle the car parking games category? It's a complex test that seems to be very easy, but in fact very challenging. One hit and you must start from scratch. The room for mistakes isn't present here! Race across the world at 300 km per hour and discover new impressive places. Meet new people, make new friends, and ask them for a participation in crazy hot pursuit, you've got the faster car! Invite friends to two player or multiplayer game and enjoy fun challenging experience. Most car games on this page is suitable also for kids.

Be the king of the road 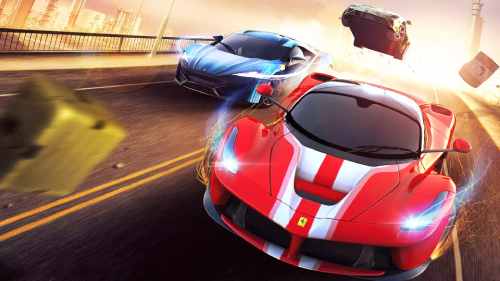 Playing car games online has one unquestionable advantage - no damage to your car hurt you. And... with no responsibility, there are no limitations! Take a cool car and drive it through a landscape in the Fast and furious style. Need for speed will bring you into many dangerous situations including - of course - police. The next benefit of car games is, that you can choose your preferred side. You can experience a police chase as a bad boy as well as in the body of a policeman. Whether you prefer any side, the style of the ride is very similar - full power, forward, do not look back. It's a matter of time then one of the drivers will not handle control the car and hits 1673 soonest obstacles. This number already means destroyed entire street. In such moment, your car may reject next ride. Without any stress, press restart and try another ride. If you love sharp bends on the road, do street racing, otherwise drag racing. Are not you able to decide? Play any game you like. For the most exclusive cars you can drive to the United Arab Emirates to check Dubai's police cars. Generally speaking, here is no need to violate traffic regulations to become the king of the road. But, this is games, so why do not enjoy a bit fun from unusual ride? Sit behind a steering wheel of one of the fastest worldwide cars and do not think much. Play free right in your browser, no installation needed!

Drive and enjoy all conceivable cars thanks to car games

Every petrolhead has a dream car that he would like to own, or at least drive one time in the life. Feel its curve, sound, look and performance on his own, it's often what he thinks about before bedtime. There are many motivational quotes saying "work more and you will be able to buy that car"... ...Even, there is one joke based on that: An employer has come with a new Ferrari and asks an employee whether he likes it? The employee says that so, it is awesome. The employer smiles and say: "When you will be working another year like now, I will buy even better car". Anyway, don't be discouraged and follow your dream. Either by years in a work, or by one click on PacoGames. Car games on this page allow you drive your dream car already now. And if you do not find such car in any of the games, you can request for adding it into some game. Some developers communicate with players via comments where cars are ordinary topic. Is not it cool? Do not hesitate, play, comment, enjoy... or earn for the real one. It's life and nothing more.

Games with cars belong between the most popular game formats. Browser car games reflect the same trend. Find out how they look and how addictive they are. All the games are playable for free without need to install anything. Only 1 click required and you can play.

Paragraphs above summed up everything necessary related to car games. But, what actually are the cars? According to Wikipedia, a car is a wheeled motor vehicle used for transportation. Someone may call it also automobile. Most definitions say that a car:

If we would look at the word "car", we can find more its origins. The most recognized one is from the Latin word "carrus" or "carrum", both mean "wheeled vehicle". There is also known old Northern French word "carre". Car word has synonym word "automobile". It's origin is quite simple - derived from the Ancient Greek word autós (= "self"), and the Latin word mobilis (="movable"). More detail is available in this Wikipedia paragraph.

First working steam-powered vehicle is a 65cm-long scale toy model from 1672. This model was unable to carry out any passenger and thus it does not fill definition of a car. First real car capable to transport a human was built almost 100 years later, in 1769. This steam.powered car was product of French inventor Nicolas-Joseph Cugnot. First internal combustion powered automobile was introduced 39 years later, in 1808. This automobile invented by François Isaac de Rivaz was actually hydrogen car. It was composed of hydrogen-powered internal combustion engine with electric ignition fitted. By car, still imagine rather primary working vehicle). Next years were very productive and brought many inventions and milestones. Three worth of mentioning are:

Late 19th century and early 20th century was in a sign of electricity-powered cars. They were providing a level of comfort and ease of operation. It could not be achieved by the gasoline cars of the time. Anyway, next development on the field of internal combustion engines brought good results. Simplified operation demand in combination of advantages was a game changer. Cars with this engine offered simple use, great operation range and fast refueling. Growing petroleum infrastructure allowed overcoming huge distances. With the arrive of Model T by Henry Ford in 1913, petrol cars have got a dominance. Electric cars with double price of the petrol cars had no chance. By the 1930s, they were removed from all important markets.

The win of gasoline cars is visible also in car games. Most cars is powered by standard four-stroke petrol engine. Despite the years of development, it is still quite similar to the one invented by Nikolaus Otto. What's new, that is that electric cars get a new chance. The electric power is very beneficial, offering high performance in a small size. But the main purpose why they came to the scene are regulations. Car manufactures are under a pressure to reduce emissions of CO2. Production of electric and hydrogen cars is the right path, there is clear that we will see many such cars. These cars start appearing also in games. Mostly due to interest of players themselves - everyone is fascinated by Tesla and wants to try drive it. Games are the simplest way. With next cars in the market, there is also higher interest for electric powered cars in games. Are you looking forward for games with quiet and fast cars? For example as electric Porsche Taycan? Or do you still prefer classic clumsy and loud petrol V6 like in Porsche 911 GT3? Vote by playing!

Is any car game blocked on your electronic device? Most likely this is due to blocking by network or device administrator. To play the games, there is a need one of following: